The National Cargo Bureau (NCB) – a US inspection body authorized to certify compliance with Dangerous Goods regulations – reports that a recent inspection initiative revealed an alarming number of containers carried by sea include misdeclared dangerous cargoes that represent a serious safety risk to crew, vessel and the environment.

In a white paper published today the National Cargo Bureau is calling for industry to adopt a comprehensive, holistic and coordinated approach to address this worrying trend.

The inspection initiative also showed that 55% of containers were non-compliant with 43% failing to secure dangerous goods correctly within the container itself. Approximately 6.5% of containers carrying dangerous cargoes had been misdeclared.

It has been reported that, on average, a containership suffers a major fire every 60 days.  However, in 2019 there were nine major containership fires reported suggesting that the frequency of incidents is increasing. Tragically, these incidents often result in loss of life, severe damage to hull and cargo as well as a series of associated consequences including significant environmental impact. It is strongly suspected that these vessel incidents were caused by issues related to poorly stowed, undeclared or misdeclared dangerous cargoes. With more containers being carried and containerships getting bigger, risks are increasing in number, value and concentration.

Ian J Lennard, President, NCB explains: “The link between undeclared, misdeclared or poorly stowed dangerous cargoes and the increased incidence of catastrophic containership fires is hard to ignore. Because of the clear and present risk predominately to safety of life but also to ships, their cargoes and the environment, we are calling for all supply chain participants to work on a solution together.”

He went on to say:

“The reasons for issues with dangerous cargoes are diverse and include a challenging regulatory environment; cargo prohibitions; more complex supply chains; and varied levels of understanding and processes. Because of this, it is important that the stakeholders work together and adopt a range of measures that will address all potential causes.”

The NCB white paper details 12 recommendations as part of their holistic approach ranging from embracing a safety culture for dangerous goods compliance to practical measures for container and vessel inspections and monitoring.

Taken together, NCB is confident that its recommendations will be effective in reversing the current trend of increasing containership fires.

The white paper titled “A comprehensive holistic approach to enhance safety and address the carriage of undeclared, misdeclared and other non-compliant dangerous goods” can be downloaded from www.natcargo.org/Holistic_Approach 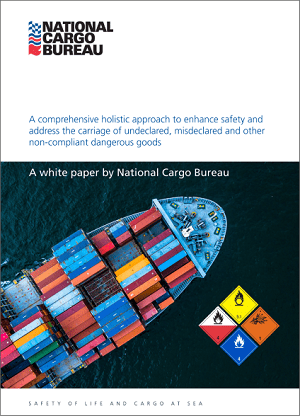