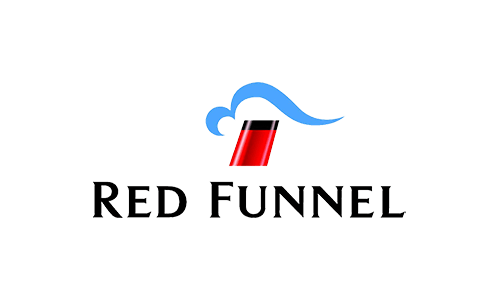 Red Funnel is the original Isle of Wight ferry company with a history spanning over 152 years.

The Company’s roots date back to 1820, when scheduled year-round Packet Services started operating between Southampton, Cowes, Ryde, Southsea and Portsmouth Harbour. In 1861, two rival companies merged to form the Southampton Isle of Wight and South of England Royal Mail Steam Packet Company Limited or “Red Funnel” for short. The famous house flag was derived from the names of four steamers that were in the newly merged fleet – Sapphire, Emerald, Ruby and Pearl. In the 1900’s, the growing interest in travel provided the Company with an important role – the provision of tendering services to the great passenger liners. Many would anchor and use Red Funnel’s steamers for alighting passengers and transferring all kinds of cargo.

In 1885 the Company expanded into tug ownership and continued to consolidate its market position throughout the wars. After World War II, recession and changing holiday habits led to the decline of the excursion business and preoccupation with the Southampton-Cowes packet services, particularly in light of growing car ownership and the transfer of cargo onto wheels. Diesel propulsion marked a turning point in the Company’s history with the first purpose-built diesel vehicle ferries joining the fleet in the 1950’s.

Today, Red Funnel carries 3.2 million passengers and 700,000 vehicles on its year-round services between Southampton and East & West Cowes on the Isle of Wight. Red Funnel has been using Hazcheck Workstation to check the dangerous goods that are carried on their ferries since 2006.  They purchased IMDG Code e-learning training courses in early 2014. “We purchased a combination of General Awareness and Function Specific IMDG Code e-learning courses to train both our office and ‘hands on’ staff that have a responsibility to load and unload the ferries.  We were able to configure the function specific courses specifically for our staff to ensure they were focusing on the most appropriate training material for their roles”.

Hazcheck Workstation is the powerful but user-friendly tool for shippers, forwarders, agents and ship operators to check DG shipments and produce documentation. It displays key information, validates a mixed load for IMDG Code segregation compliance, and displays relevant packaging options. A Dangerous Goods Note can be produced in PDF format.

IMDG Code e-learning is a cost-effective online training tool for all shore side staff involved in the handling and transport of dangerous goods by sea. It gives high quality training that complies with both the general awareness and function specific training requirements in the IMDG Code.