IMDG: Time to get ready. Amendment 40-20 to the IMDG Code becomes mandatory in June. Exis Technologies explains what users should look for and the tools it offers to help

The Covid-19 pandemic has caused a lot of disruption to the regulatory process, as it has to many dutyholders. In recognition of that disruption, the International Maritime Organisation (IMO) allowed an extra six months before the latest edition of the International Maritime Dangerous Goods (IMDG) Code became mandatory. As a result, Amendment 40-20 will come into force on 1 June 2022 and remain valid as normal until 31 December 2023.

Although the IMDG Code is updated every two years, a cause for concern is that not every company shipping dangerous goods on an international scale understands that this is a mandatory set of international rules – the Code was originally adopted in 1965 but was given mandatory status under the umbrella of the International Convention for Safety of Life at Sea (Solas) in 2004. Dutyholders need also to be aware of the need to update their processes to comply with each new Amendment.

Exis Technologies also says that, in some cases, there is a lack of understanding about where the responsibility lies for complying with the Code and which goods are hazardous when presented for shipment. For the last 35 years Exis has been at the forefront of helping people to understand the IMDG Code, developing digital systems and training to allow them to ship dangerous in compliance with the regulations, safely and efficiently.

To help its customers remain in compliance, Exis Technologies has been updating all of its products in line with Amendment 40-20. For instance, Hazcheck Validation systems help customers with substance enquiries, segregation, stowage and packaging checks and the production of documentation required for shipping in the transport chain. The systems are suitable for all sea transport links from shore-based manufacturers of chemicals, to freight forwarders/logistics companies who need to get the dangerous goods to the shipping line with the correct documentation in place generated by the shipper, and deepsea lines who need to book the dangerous goods onto their ships, stowed and segregated correctly and in a timely manner.

The Hazcheck Detect real-time cargo screening solution is now helping to identify mis-declared and undeclared dangerous goods in seconds. This helps to avoids life-threatening incidents such as ship fires, but that does not mean that industry can become complacent about fixing the root cause of some of the problems picked up by Hazcheck Detect. When it is a genuine mistake, rather than wilful intent to mis-declare or not declare dangerous goods, training can help.

In 2010, IMDG Code Amendment 34-08 included mandatory training requirements for all shoreside staff involved in the handling and transport of dangerous goods by sea. The IMO Member Governments recognised that, to transport dangerous goods safely, people involved in those roles needed to be trained to an appropriate level for their role. Exis has been producing IMDG Code e-learning training since it became mandatory and it is updated for every new Amendment. A range of job-specific and advanced courses is available and a refresher course is also provided.

IMDG Code e-learning is a certified Det Norske Veritas Learning Programme. A certificate is generated for successful candidates and can be printed out and kept as a record of training.

To accompany each biennial update to the IMDG Code, Exis Technologies offers a free summary of the changes, the latest of which addresses the changes that appear in Amendment 40-20. This document, which is available in English, French, Spanish and Chinese, can be downloaded from the Exist website at https://existec.com/hazcheck/imdg-code-free-summary-of-changes-40-20/. A more detailed summary of the changes can be requested here: https://existec.com/hazcheck/imdg-code-40-20-detailed-free-summary-of-changes/.

IMO will also publish an Errata document before the new Amendment 40-20 comes into force. This will include:

Exis will publish a summary of the Errata on its website once it is officially available.

Although the IMDG Code has been in existence since 1965, measures to improve safety at sea continue to evolve, especially as the vessels that are carrying the dangerous goods continue to increase in size at an impressive rate. In 2019, the Cargo Incident Notification System (CINS) published new safety guidance for the stowage of classified dangerous goods on board containerships in response to a number of serious ship fires. The guidance is intended to complement existing measures implemented by ship operators for the carriage of declared dangerous goods, and also the provisions of Solas and the IMDG Code, rather than replacing them.

Exis helped in the development of this guidance with its detailed knowledge of the IMDG Code Dangerous Goods List and stowage requirements, and offers Hazcheck Risk Zone Data free of charge to support the CINS stowage guidelines. The data includes UN Number, Packing Group and Risk Zones (RZ). For example, two Risk Zone categories, RZ1 and RZ2, allow stowage below deck, as these substances, should they catch fire, can be effectively extinguished using carbon dioxide.

The Hazcheck Risk Zone Data has been updated to Amendment 40-20 and it is important that the new version is being used by customers from 1 June at the latest. Customers registered on the Exis website will automatically receive updates about changes to the IMDG Code. New customers can download the Hazcheck Risk Zone .TXT file from the Free Industry Tools section of the Exis website at https://existec.com/product/hazcheck-risk-zone-data/.

Exis has also been providing the IMDG Coded Variant List (CVL) as a free resource to assist companies in exchanging IMDG Code information in EDI messages such as BAPLIE and IFTMBF. This is the result of a partnership with the SMDG Group, which supplies the manuals to define EDI messages in the maritime industry. The CVL helps to overcome the ambiguities when identifying a variant within a single UN number that may occur when two companies exchange dangerous goods information. This exchange may be automatic using EDI files and it may also involve some manual procedure. These ambiguities can arise for a number of reasons, such as:

The IMDG Coded Variant List can also be downloaded in .TXT format at https://existec.com/product/imdg-coded-variant-list/. 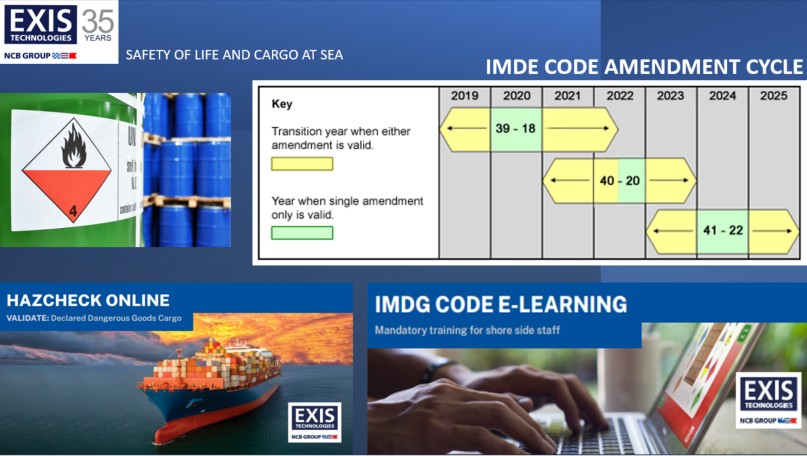